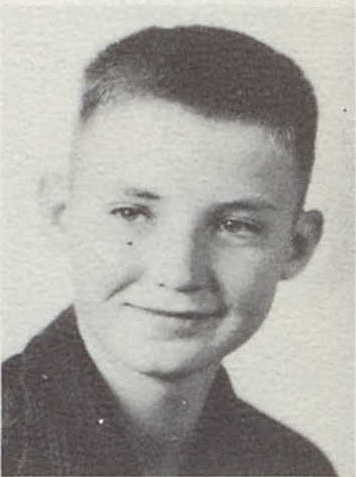 Two of my brother’s newly found older birth sisters were positive they knew my brother’s birth dad. He lived with their family briefly when one of them was about 11 and the other was about 15. He was separated from his wife. They said his first name was Barry. That was it, they could not remember his last name; they were young. My brother’s non-identifying information (what is given to adoptive parents in sealed or closed adoption) said his birth father worked for the railroad. That piece of information matched their memory of Barry. The only other clue they had was that he was years younger than their mother, still in his 20s.

My brother’s sisters have strong memories of Barry wanting to keep his baby and raise him, rather than have the baby placed for adoption, and they remember Barry coming over to their house with his parents to argue for that, but their mom was not going for it.

While waiting for my brother’s DNA matches, I tried to find a Barry who lived in that area of Southern California and worked for the railroad. I called railroad societies, trying to access payroll lists or similar, and checked many records on Ancestry and elsewhere, but found nothing. I called the FamilySearch Library in the small California town and someone I talked to knew someone who had an old church directory that had a photo of my brother’s birth family in it, with his mom’s new husband. But that was all.

Since one sister had a memory of their mom coming back from Tijuana and waving a marriage certificate to her mother, saying she and Barry had married in Tijuana, I spent some time trying to find out if such a record existed – which would have Barry’s last name – but couldn’t find a record. We think now that it wasn’t a valid marriage or documented.

When my brother’s Ancestry DNA results came in, his top paternal match at the time was a woman with a common first name, and a fairly common last name. I didn’t know if it was her maiden name or married name. There was no location information in her profile. I had permission from my brother to contact matches, but she did not respond to a message I sent her on Ancestry. Unfortunately, a lot of people you contact through the Ancestry messaging system will not respond. They often don’t see that they have a message (look for a number on the envelope icon at the top right to see if you have a message). The messages often don’t go directly to a user’s email box. Or they just don’t respond, for whatever reason.

I spent a day or two trying to figure out which person with that name was this particular match, out of all the people with that name in the world. She did not have a public tree on Ancestry, to help me out by being able to look at names of her deceased ancestors and then researching their descendants and where they lived. I decided to focus on California, since that’s where my brother was born and adopted. I got lucky and she did turn out to live in California, but only because she moved there from Idaho, where she grew up.

My brother’s DNA match to this woman was 404 centiMorgans, which Ancestry predicted to be a second cousin. I knew from using The DNA Detectives Autosomal Statistics chart that this match was more likely to be a first cousin once removed (1C1R), half first cousin, or even a half-great-aunt or niece. Ancestry is conservative in their predictions of relationships. Often the match is a closer relationship than they predict.

Learning tip: For those who test at Ancestry.com, find the number of centiMorgans you share with a match by clicking on their user name, and then clicking on the lower case i in a circle. That will pop up a window with the information. You can copy and paste it into the Notes section (pencil icon) to make it easier to see next time you’re browsing your matches.

I found many phone numbers for women with this name in northern California. Cold calling is not always the best method, but sometimes it is a good choice. In this case, I chose the likeliest person, based on age and a few other factors, wrote a few notes of what I wanted to ask, and made the call. CeCe Moore teaches: “Always look at the simplest possibility first.”

“Hello, is this ____ ____? You don’t know me, but I’m helping my brother with his genealogy. He took an Ancestry DNA test and someone with your name also took an Ancestry DNA test and is a top match to him. Did you take an Ancestry DNA test, by chance?” When she said yes, I asked her if she had any male relatives named Barry. “Do you mean my first cousin, Barry Brokate?” I said, “I don’t know, did he live in the La Puente, California area in 1966?” “Yes.” Did he work for the railroad?” “Yes.” “Was he about 6 feet tall with brown hair?” “Yes.” Everything matched up. I told her why I was asking, and she shared with me that she grew up with her cousin Barry in Pocatello, Idaho. She was sad to share that Barry had been an alcoholic, very involved in AA as a mentor, and that he passed away from suicide over 25 years ago. She said he never had any children, but she gave me the name and number of his surviving brother.

I called that man and briefly told him my story that my brother was closely related to his family, and his cousin had taken a DNA test and had given me his number. He was gung-ho to talk about his family history and heritage and told me several interesting things such as the origin of their family name from France. When I mentioned that my brother was adopted, he quickly ended the conversation. I don’t think he believed me that his brother had a child who had been adopted. If I had known then what I know now, I would have tried to get my brother to make the call instead of me, so he could talk to his uncle, if only the one time. This is a basic for search angels: Let the adoptee or person searching make the contact to close family if they are able to, even if you as a researcher have permission to make contact with more distantly related family to gather information and possibly explore where the adoptee might fit in the family. But I didn’t know that guideline yet.

I called Billie Grace, Angie’s daughter, and she was thrilled to hear from me and to find out about my brother! She was able to fill in many blanks. She said Barry was a very kind man and kind step-father. Although he and her mom split up, he tried to keep in touch with her, and when she was about 11, he took her out to lunch. She was able to tell me that Barry and Angie had a baby boy who was stillborn, born the same month and year as my brother in a hospital a few miles from where my brother was born. Billie Grace is the one who found and provided the only photo of Barry as an adult that we have so far.

So that was heartbreaking, for Barry to lose his only two known children the same month. One was not born alive and the other was placed for adoption. As I mentioned in the last blog post, my brother’s siblings were required to tell anyone who asked that their baby sibling was stillborn – although he wasn’t. We believe that my brother’s birth dad was also told that by his birth mom, as she didn’t name the correct father on the birth record since she knew he wouldn’t sign a relinquishment form.

One surprise to me in these searches is that “new family” is sometimes not blood relatives. I consider Billie Grace new family, not only to my brother but to me. She has a big heart, and she says her mom Angie had a big heart and would have raised my brother as her own child with Barry if they had that chance. That is not the way the story went, though.

Later on through more work on my brother’s tree with traditional genealogy records, I found a half-aunt for him, Connie, who was excited to know about him and to find out Barry had a child who survived.

So, this was a fairly easy search, and I wish you all fairly easy searches. But remember that we found out my brother’s birth mom was adopted in Dallas, Texas in 1933? That search took many, many hours, long days and nights and a few months to figure out. The DNA matches were not nearly as close. The trees were much more tangled.

Stay tuned to learn a lot about Texas adoptees and Texas searches!